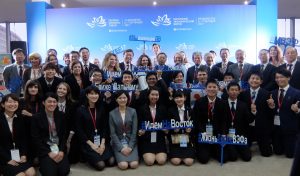 Hokkaido University President Toyoharu Nawa participated in the 3rd Eastern Economic Forum and the Japan-Russia Student Forum held in the Russian city of Vladivostok from September 5 to 7, 2017.

The Eastern Economic Forum is an annual forum held at Far Eastern Federal University, a partner institution of Hokkaido University, to promote overseas investment and international business in the Russian Far East. This year’s forum was attended by the Russian President and the Japanese Prime Minister, as well as representatives from government, industry and academia around the world.

President Nawa attended as a panelist at Session 2, entitled “Developing APEC Education Strategy,” of the 6th APEC Conference on Cooperation in Higher Education, which was held on September 5 and 6 as part of the Eastern Economic Forum. His presentation featured Hokkaido University’s educational and research programs as well as plans for future exchanges with Russia. After the presentation, he engaged in lively exchanges of opinions and ideas with other panelists regarding the future of education and Japan-Russia exchanges.
President Nawa also traded opinions regarding future exchanges between the two countries at a Japan-Russia Business Roundtable discussion and a meeting held by Prime Minister Abe.

The Japan-Russia Student Forum, held on September 4 and 5 at Far Eastern Federal University in conjunction with the Eastern Economic Forum, aimed to promote mutual understanding among young people from the two countries through discussions and make future-oriented proposals for the countries. It was attended by 16 students from 12 Japanese universities and eight students from two Russian universities.
After discussing their individual specialisms related to future relations between Japan and Russia on September 4, the students presented the results of their discussions as the Japan-Russia Student Forum Joint Proposal for Action at the plenary session on the following day. On September 6, the students paid a courtesy visit to Prime Minister Abe to hand the joint proposal to him. Mr. Abe expressed his expectations for the roles young people will play in Japan-Russia relations in the future.

President Nawa attended the plenary session on September 5, where he offered words of encouragement regarding the joint proposal with some touches of humor. He also joined the students when they met with Prime Minister Abe on September 6 and watched as they shared their thoughts about Japan-Russia exchanges with Mr. Abe.