On Tuesday, June 19th, Ambassador Mikhail Yurievich Galuzin of the Russian Federation to Japan, gave a lecture at Global Square AW301 for approximately 250 university faculty, staff and students. The lecture was held as a part of the Ministry of Education, Culture, Sports, Science and Technology’s “Top Global University Project” and since taking office in March, the lecture at Soka University was the first in a Japanese university. 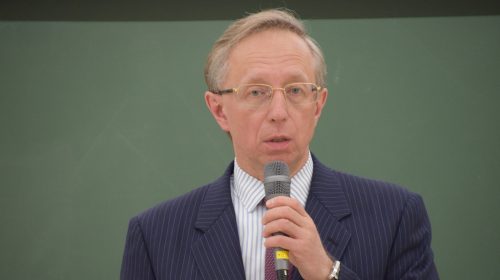 Ambassador Galuzin learned Japanese at Moscow State University and studied at Soka University as an exchange student from 1982 to 1983. Thanks to this background, it led to holding this lecture. Ambassador Galuzin has deep diplomatic experience, joining the Ministry of Foreign Affairs in 1983 and also has served as a 7-year minister in Tokyo. Being fluent in Japanese, Ambassador Galuzin had been a part of diplomacy between Japan and Russia as an interpreter for former Soviet President Mikhail Gorbachev and former Russian President Boris Yeltsin.

Mentioning economic and human exchange, diplomacy, history, etc. in Japan-Russia relations until now, the ambassador gave a lecture entitled “About Russia-Japan Friendship – Educational Exchange”. While touching base on the Russia-Japan Summit Meeting in May this year, “the 20th meeting of Russian President Vladimir Putin and Prime Minister Shinzo Abe was held. Although not all problems have been solved, new relations are being formed. The Japanese Prime Minister participated in the St. Petersburg International Economic Forum for the first time and new moves have emerged. In the times of globalization, in order to understand each other, dialogue through private exchanges and educational exchanges are being prioritized.” 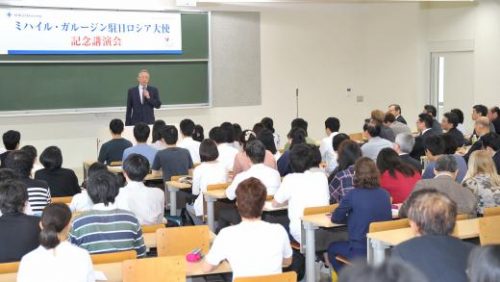 A comment from a participating student, “I’m pleased to hear that the ambassador, a former exchange student at Soka University, is the bridge between the two countries. I am also learning the history of both Russia and Japan and want to contribute to the international society through challenges of study abroad.”